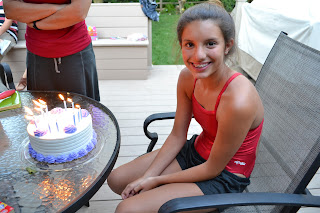 Hi Knitters,
Here are a few more photos of TC's 13th birthday celebration. We had lots of family over for a cookout. My son who just graduated made pulled pork that was a two-day process. He is really into cooking and trying new things. I helped him make homemade pretzels yesterday which was really fun. I took photos of that so I'll share it soon. For the party, we had pulled pork sandwiches, watermelon, corn on the cob, salad, and of course, birthday cake. 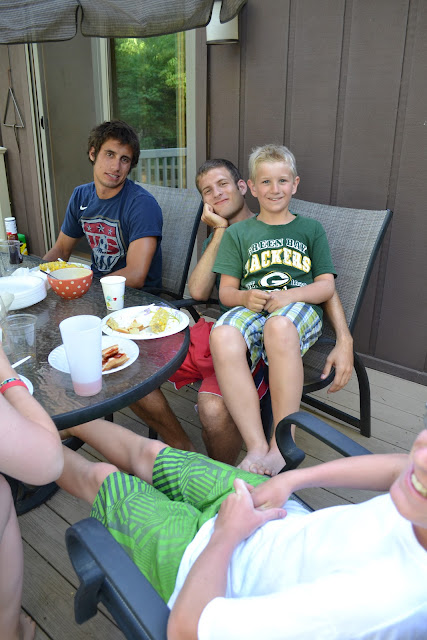 Now, these boys, the cousins, are such goofballs when they get together. You never know what they will come up with. Do you have teenage boys, anyone? You see my son thought it was funny to make a weird expression in the photo above and.... 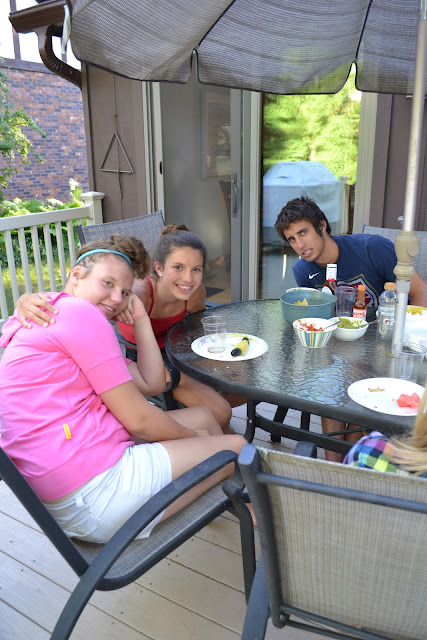 ... this next photo as well. Both of my sons think that is really funny for some reason. 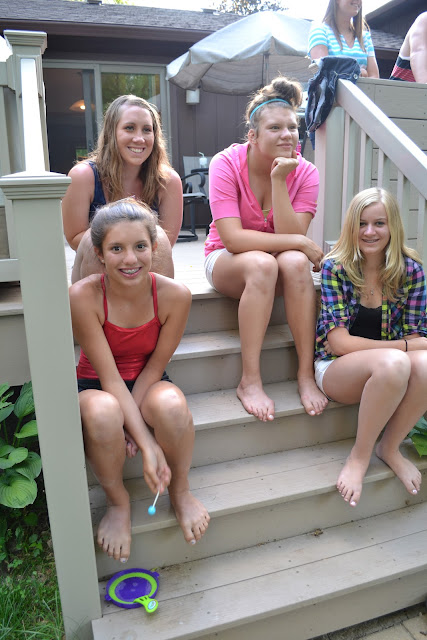 The girls on the other hand do their best to look pleasant. That's my Miss Molly upper left, we love her, and my niece is lower right. You already know TC and Peachy. 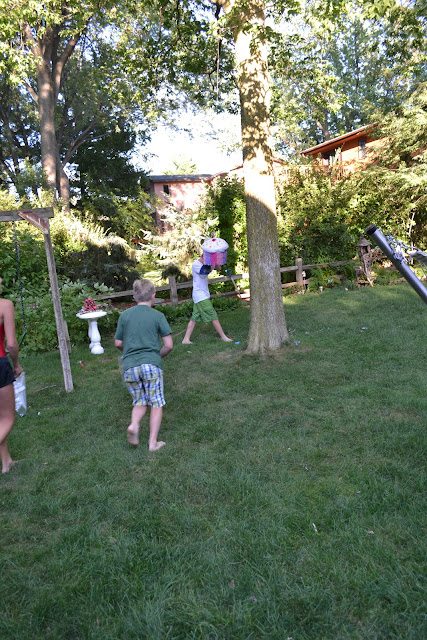 Here they are thwacking the cupcake pinata that was strung up somehow to a big tree in our yard. I didn't even see how that was done but I heard something about a string being tied to a big rock that was thrown over a branch. I thought that showed some ingenuity.

I have to tell you a little story about something my boys and the cousins like to do together. They love making silly videos. About 4 years ago on a vacation together, the boys made a video called, Basketball Master, and it stars my sister's son. The boys think this video is hilarious, every time.

The next video (below) was made just this summer and it again stars my nephew. My oldest son played and recorded the music and he does all of the filming and editing on these videos. You can see my second son in the lifeguard chair for part of the video at the pool.

I just love this video, it starts with a flashback from the first Basketball Master:

Now, below, is another video starring my brother's son, who is 9-years-old. My second son is the crazy guy in the video, my oldest son did the taping and editing. If you have teenage boys or even younger boys, you may understand this video a little better. The boys think this is so funny and my little nephew came up with the storyline on his own pretty much. This was all filmed at the birthday party and it was a big production.

I think it is funny because I can hear my nephew cracking up while he is supposed to be talking. He had a blast making this video. It is supposed to be cartoon-like. It was all done in good humor and no one was hurt in any way so don't worry. The boys think this is hilarious.

Oh, and my nephew's name isn't really Carl, he just made that up.

Okay, next up I'll have some knitting and spinning to share. I've already taken some great photos of a few things I have brewing.

Also, the Patchwork Sockalong is coming to a close this coming weekend (June 30th at midnight to be exact) and I have gathered some spectacular prizes for the participants who will be entered in prize drawings if they completed a pair of socks. I will be posting about the prizes coming up. It is a prize grouping of some of my most favorite knitting items out there. Even if you aren't in the sockalong, these are products you'll be interested in.

I hope you enjoy the videos.