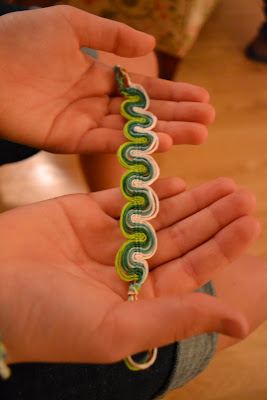 Hi Knitters,
TC has been a crafting busy bee. Her newest undertaking is making friendship bracelets amongst a few other things which I will share later. She has had a huge bag of embroidery floss for a long time. Neither of us can quite remember how she got all of that embroidery floss which is kind of funny. What I find so interesting about TC is how she studies and learns a new skill. I don't know what triggered the new obsession with friendship bracelets but she must have seen something somewhere.
She hopped on youtube and found a young girl who has an enormous series of tutorials on all kinds of stitches for these bracelets. She spent so much time studying and also writing out the step by step instructions for each of the patterns. Then she takes her written notes and goes from those to actually make the bracelet. I think the action of writing out the steps brings clarity for her so she can understand better.
Click here for one of the tutorials TC found!
With these bracelets you can even spell out names with lettering. There are stripes and chevron patterns, too. She has one bracelet going that is called the rag rug which is a series of colorful knots. For all of you kids from my generation or older, this is really macrame done on a tiny scale, which means each bracelet is a series of knots. Macrame in my day was done with rough, hairy twine and held hanging plants or made wall hangings with owls. Those were the days. I know I tried my hand at macrame long ago.
TC became particularly fond of the wave bracelet in the photo. She has made 3 or 4 of these so far. The one above with the shades of green is for my son's girlfriend. 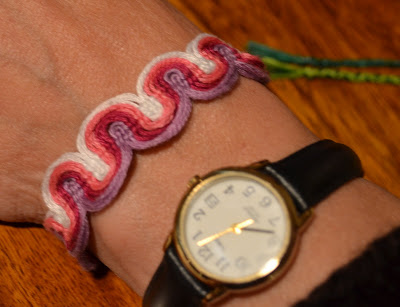 She made this one in pinks and purple for me. I've been wearing it ever since. The other day TC loaded up her bag of thread and her trusty clipboard (to hold the bracelet while working) in her backpack to take to school. She has a really nice study hall teacher who lets them chat if their work is done and TC had the idea to teach a couple of her friends how to make friendship bracelets. I guess they loved it and now have made their own wave bracelets. If you get to sit by old TC in study hall you may just learn a new craft or two along the way. 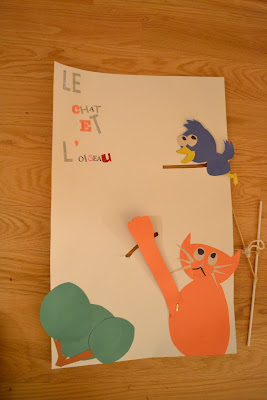 In other news, I have to share this poster my son made. He is a junior in high school. He made this poster as part of a group assignment for French for Le Chat et L'oiseau (the cat and the bird) which is a children's story. I think that's correct. It is supposed to look cartoonish and child-like.
The fun thing is that by moving the attached skewers on the right side of the poster the cat's arm moves along with the bird, like he's swatting. He wanted a brass fastener but I didn't have any so instead he asked if I had any string. Um, yes, I do have some string.
Anyway, I thought it was kind of cool and innovative for a school poster. This son is into animation and is taking a computer animation class right now which he loves. He brought the character movement right into his poster. He also told me likes the French word for bird, l'oiseau. Me, too. 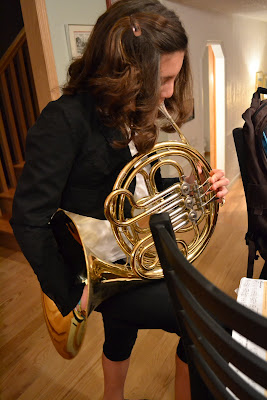 TC is continuing to play the French Horn. I thought this quick last minute practice session before her concert was cute. She had her music on the stool in front of her. I love a good beginning band concert. They all sound exactly the same.
Well, those are some of the goings on over here. What's happening at your house?
best, susie
Posted by Susan B. Anderson at Monday, March 07, 2011 17 comments: