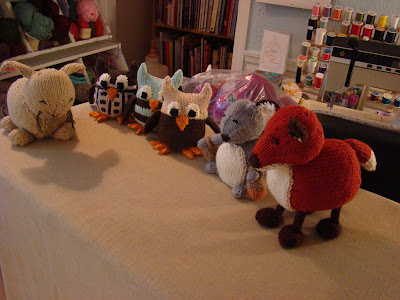 I am happy to present the 10 winners of the Knit Simple Holiday Issue 2010, all randomly selected this morning:
nutmegknitter
ktmay12
amyknit40
betz white
mellypea
mbridget
pattytrish
DreWKnits
sarahsparkle
knitpurlmama
Congrats to all of the winners! A special congratulations to mellypea as she is the winner of the Spud & Chloë Sweater, 1 skein each in Toast, Watermelon and Ice Cream, to make the Bunny! I have already messaged on Ravelry or emailed all 10 winners. You have a couple of days to get back to me with your mailing address. If I don't hear from you I will be selecting a new winner from the comment pool.
Thanks to all of you for entering. Wow, that response was totally unexpected. My head is still spinning. 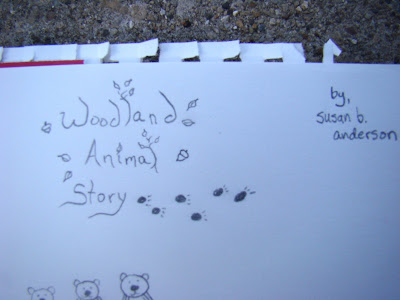 I love to share a little bit of the behind the scenes action. That's the stuff I always love the most. I mentioned that I had a lunch with Carla Scott, Renee Lorion, and Faith Hale where I was presented with this project. As soon as I heard about the Woodland Animals story I couldn't wait to get started. The first thing we needed to do was pick the projects I would be designing. There are so many woodland creatures to choose from. We had initially talked about making three bears using the same pattern but differing weights of yarn to change the size of the finished bear. 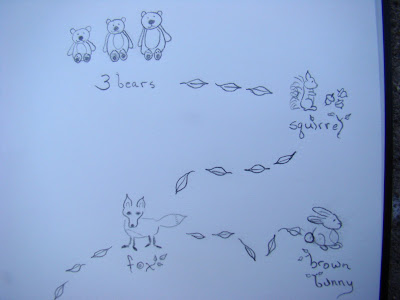 You can see that my sketch started with the three bears idea. Next, I moved on with a fuzzy-tailed squirrel with a couple of acorns thrown in. At this point I didn't plan on a reversible toy for the squirrel but later added the hedgehog to make a reversible or flip toy. Carla Scott wanted some sort of a toy with a twist for the mini-collection. Following my leaf path, I've always wanted to make a red fox and here was my chance. 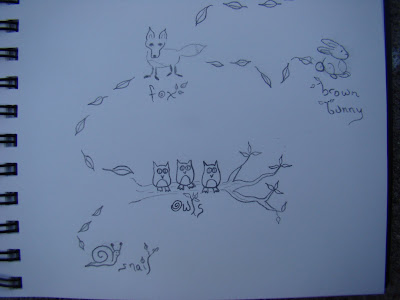 You know I love the bunnies. I always think of a woodland bunny scurrying away as you walk on a forest path. I really wanted to include a different bunny than I had done before. I have designed so many bunnies, probably dozens, but I can't ever get enough it seems. The little owls ended up being my three-part project instead of the bears. The owls use the same pattern only with color variations that include stripes, simple fair isle and two-toned color work.
I wanted to do something teeny-tiny so I threw in the snail at the bottom of my sketch. Forests are filled with tiny creatures crawling under leaves and fallen tree branches. Snails also remind me of woodland fairy scenes. The snail didn't make the final cut along with the bears. I'll save those for another time. 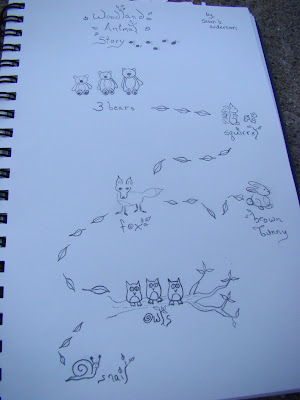 These are the actual photos of my sketchbook that I sent off to the Soho Publishing/Knit Simple offices for review. I don't have a working scanner so I often just take photos and send those on when I need approval for projects or whatnot.
When I look back at my scratchy initial sketches I am always surprised at how much my drawings look like the actual finished projects. I don't really refer too much or at all to the sketches once I start knitting and pattern writing. The sketches must become embedded in my head somehow.

The shots of the animals in a row are so adorable. The one I showed on the last post included the reversible Hedgehog to Squirrel with the Squirrel showing so this one shows the Hedgehog at the end of the line.

I have some fun links for you to end this post. I have been gathering and gathering.
First, here are the ravelry project page links for the Knit Simple Holiday Issue 2010 Woodland Animal Story:
Hedgehog/Squirrel
Little Owls
Red Fox
Bunny
Here are some miscellaneous links:
Are you watching this blog? I am and it's worth mentioning again. Mila's Daydreams. I want to see her setting up these scenes on video while the baby is sleeping.
Jasmine from Knitmore Girls is in this documentary. You can only watch a bit at this point but it looks really fun. I want to see the whole thing.
Landslide by Fleetwood Mac on YouTube, makes me sad every time. (Annoying short ad at the start but keep watching.)
Gorgeous Cowl with a Twist on the Purl Bee. I love the yarn used.
I have to make a batch of these very soon. I think I got this link from another favorite, Hello Yarn.
I was saddened to hear of Melissa Matthay's passing at the Madison Knitters Guild meeting earlier this month. A gasp went through the crowd as it was announced. Here is a cool after-thought pocket video tutorial from her. She was a very talented knitter.
Check out this beautiful use of applied I-cord. Wow.
Did you know that the fabulous knitter, Erika Knight, designed the Vancouver Olympic parade wear for the British Olympic Team? I think that is incredibly cool! Check it out here.
That's it for now.
best, susie
Posted by Susan B. Anderson at Tuesday, September 28, 2010 10 comments: