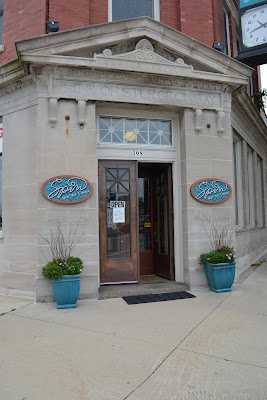 Hi Knitters,
When we were in Door County last week I discovered a fantastic knit shop. It is called Spin and it is owned by Terry. She is an energetic, fun yarn shop owner. She actually owns the old bank building in Sturgeon Bay where she opened Spin about five years ago. It is a gorgeous building inside and out and Terry has created one of the most charming and inviting knit shops I have ever seen. I am not exaggerating. I love it at Spin. 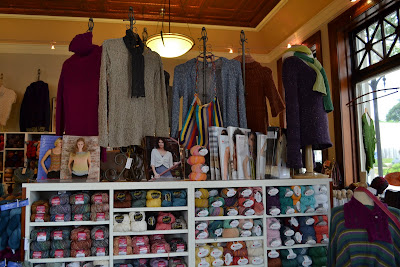 There is room after room chock full of top of the line yarns and accessories and books and magazines. The selection is so good and widespread. The shop was bustling with knitters the entire time we were there on several different occasions and days. I was impressed with how busy it was. That is a good sign. Spin is doing something right. 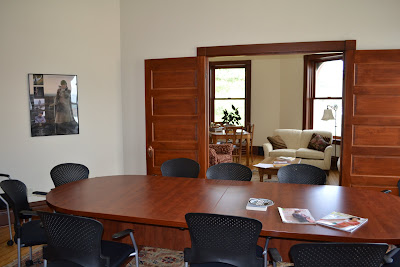 There is an upstairs where knitting groups meet with enough room to have multiple groups meeting at the same time. It is unusual to have several comfortable and spacious rooms in a knit shop but Spin has it! 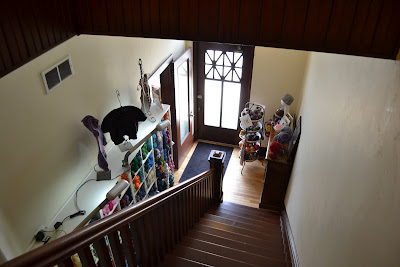 Even the hallways are bubbling over with yarn. I love the detail on the windows. The building is really, really beautiful and nostalgic. I love this setting. These stairs lead up to the big lounging/teaching/knitting group rooms. 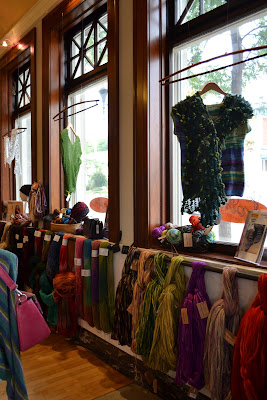 The other thing that impressed me was the amount of samples that were knit up in the shop. It was incredible. Sweaters, shawls, toys, baby items, mittens, blankets, scarves, vests, hats... you name, they had it. 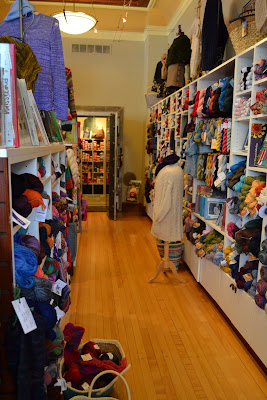 TC and I had so much fun here. When my husband took my fisherman son off to fish at a pier nearby, TC and I hung out at a big table on the main floor and knitted for an hour or so. Terry has a bowl of candy on the table at all times so we helped ourselves to Jolly Ranchers and Starburst and knit away. Good times.
As we sat we met a few local knitters and watched people trickle in and out of the shop. There is such a sense of community happening at Spin. There were so many happy knitters coming in and out and people buying sweater amounts of yarn. Terry told me they have open knitting time in the morning one day a week and then one night a week and they get a large group for both of these times. She has lots of groups that meet at her shop as well.
TC told me she wished I worked there. I thought that was a big compliment.
I'll share TC's and my Door County knitting in the next post. 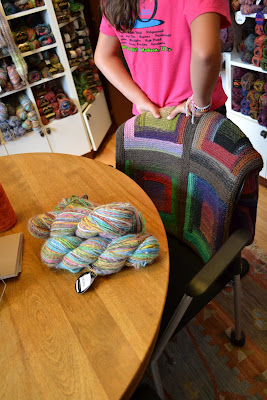 That is TC standing by the table we sat at one afternoon. She picked out some Noro Kochoron #81 for a scarf, mitten and hat set she wants to make. I am sure I will pitch in on this project (and maybe steal it to wear sometimes when we are done). This yarn is spectacular and has a little angora added.
Terry has a brand new site and she told me that very soon they will be selling all of their yarn and everything else online so check back for that if you are interested. For now you can stop by or give them a call and they will send your order right out.
Click here to find out more about Spin of Door County! 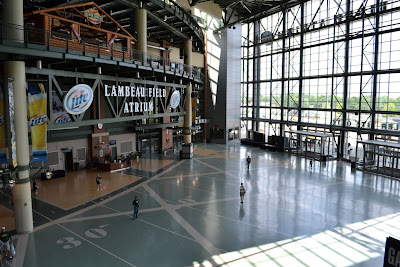 On a final side note, we stopped by the home of the Green Bay Packers on the way back to Madison. They were having a family day and scrimmage type thing so Lambeau was overtaken with enthusiastic Packer fans.
We had lunch at the stadium at a restaurant called, Curly's. (I know you are all jealous right now. lol.) All of the menu items had tricky football-Packer-referencing names. As we were having lunch the new recruits walked through the restaurant with their families and into a private room. My husband and sons were very excited about this. 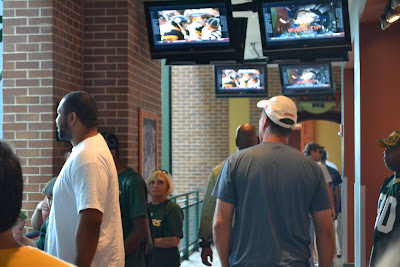 Now, I want you to get a feel for what I go through with this whole thing. We had to stand in a large hallway for a long time while each new recruit had photographs taken with their families and we watched.
The guy on the left (above) in the white t-shirt was the number one draft pick for the Packers. I don't remember his name. His stature was impressive. Just to check, my husband casually walked by the new Packer while my oldest son took a photo to see who was taller/bigger. That's my husband in the gray t-shirt and baseball cap on the right. I have to say that they are pretty similar in size. The kids all laughed so hard when my husband was "casually" walking by. He was so awkward and obvious. Do you see that blonde lady in the Packer shirt looking at him?
I live with a goofy crew no doubt. 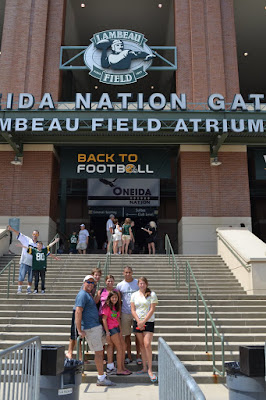 Here we all are on the big steps to the stadium. My husband explained to us why Lambeau is the perfect football stadium design. I was mesmerized (just kidding). I have zero interest in the Packers or football but if it makes my boys happy, I'm right there with them. It is harmless fun.
We had a good time and it was funny to see the crazy-devoted Packer fans in person. These people are Packer nuts! Wow, there is a whole world out there that is all Packers all of the time.
Have a good Friday, Knitters.
best, susie
Posted by Susan B. Anderson at Thursday, August 11, 2011 12 comments: