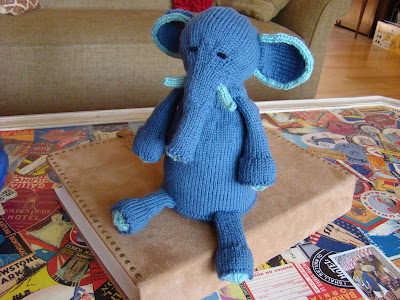 Hi Knitters,
Well, most of you guessed the elephant and I thought you might. However, there are so many projects on that page that I potentially could have designed that I thought it might make you stop and consider a few others. Thanks for the guesses.

By the way, are the people at Vogue hitting it out of the ball park or what? These last couple of issues of all of their magazines have been some of the best I have ever seen. I want to knit almost every project on that preview page, not kidding. Wow, congrats to them is due.

The pattern is now available in KnitSimple holiday issue 2008. I guess subscribers already have their issues but I heard it will be out on newsstands at the end of the month. I think it is so smart to get those holiday issues out early so people can get to work. 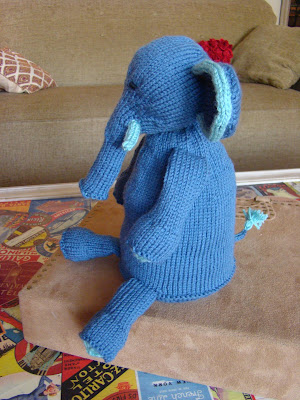 It's funny because when I look at him in the magazine shot he looks kind of different than I remembered. I think it is the angle of the photo makes him look longer and skinnier or something. My husband even said, "I thought your elephant was fatter." I loved that. Maybe he just looks more relaxed in my home rather than in a photo studio. Maybe he's been dieting since I saw him last. The pressure, the pressure... 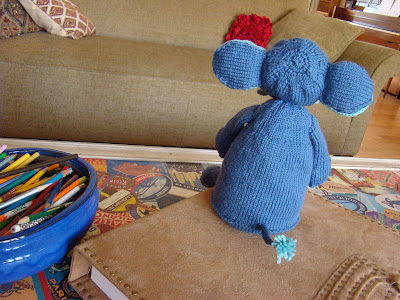 The elephant is a simple guy to make, no seaming at all. He is 10-inches tall sitting down. Here are some of the things you may want to know if you are planning to make one: 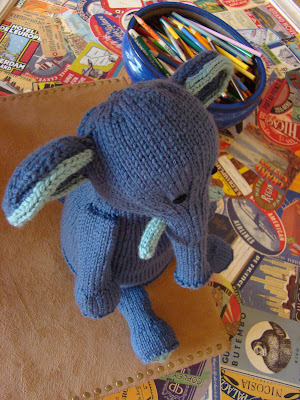 My daughter suggested the light blue tusks so I had to throw them in. 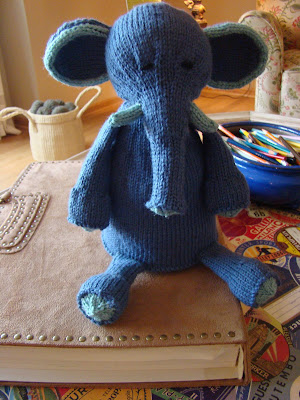 So I thought you all might be interested in the process of knitting for a magazine. I had met Tanis Gray, one of the editors and designer extraordinaire for Vogue Knitting, a couple of times before and she emailed me to see if I would make a toy for an upcoming issue. I, of course, said sure. Then I waited for her to give me some details and to decide on the yarn they wanted me to use.

When she wrote back she told me they were doing a whole blue-inspired gift knitting section in the Knitsimple holiday issue. They wanted me to knit a blue teddy bear. I thought maybe we would want to do a different animal. Although I'm not opposed to doing bears, I just thought it might add a fun twist to do something a little less traditional. Bears are done so often. So Tanis suggested I send in some sketches of what I was thinking about.

I looked through my old photos, this was back in May 2008, and I found the actual sketches that I sent in to Tanis. I drew out four options in about 15 minutes, photographed them and sent them to Tanis (I couldn't get my scanner to work). What I want you to see is how quick these sketches were drawn and that's really all of the information they needed. Sometimes they need swatches, too, I am sure.

It is just so do-able and I want you to consider submitting if you are interested in that kind of thing. Really, you should do it. You never know what project will click with the editors. 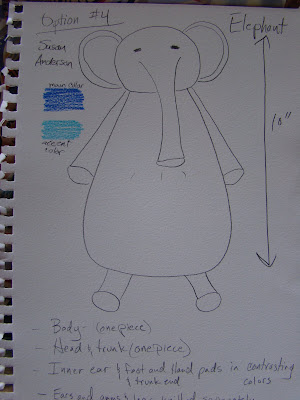 I made four options and gave a brief written description of the construction ideas I had for the toys. You can see that the elephant sketch is the one they chose and you can see that the sketch really looks like the finished elephant.

Here are the other options I sent: 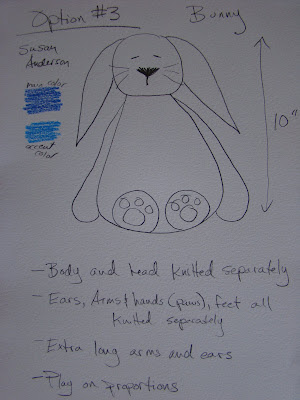 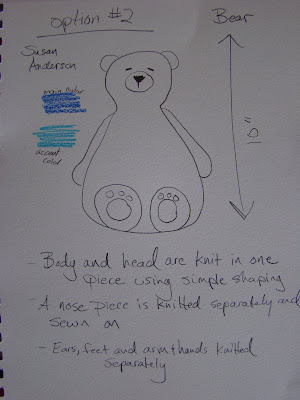 This was their second choice for the magazine, the option #2 bear. This one had a one-piece head and body construction, and then the separate arms and legs. 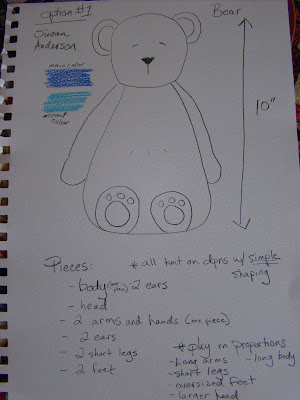 Anyway, I thought you might get a kick out of seeing the quick sketches I sent and then the one they selected for me to make.

Next, I just waited for the yarn to arrive to get to work on the project. I had about 3 weeks to get it done and back to them including the finished sample and the written pattern.

It's a good, easy and fast project and I hope to see some finished blue elephants on ravelry soon or send me pictures and I can post some here.

Back to work for me, dear Knitters. Is it Friday already, again? I asked that last week but it seemed even faster this week.